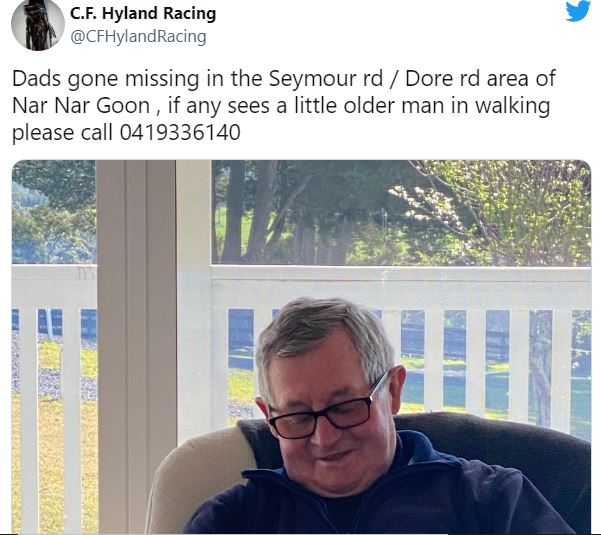 One of his sons Matthew confirmed just after 10.30am on Monday that his 80-year-old father, who went missing from the family’s Nar Nar Goon property around 4.30am had been located by police.

‘’It’s a great relief as the police have just found him,’’ Hyland said.

‘’He sounds like he’s OK, a bit disorientated but they’ve got the ambulance looking over him to make sure he’s OK.

‘’A big thanks to all those people for their concern and help in finding him.’’

Another of Hyland’s sons Sam first sent out the alert when he tweeted on Monday morning that the search was on for his father, who left the family property near Nar Nar Goon earlier that morning but has not been seen since.

‘’My dad is missing. Pat suffers from Alzheimers and has left the farm on foot about 4.30am this morning in Dore Rd, Nar Nar Goon north,’’ he tweeted.

Hyland, 80, won the 1985 Melbourne Cup aboard What A Nuisance before retiring from the saddle and becoming a successful trainer.