Nicci’s Gold is has a bit of the ‘little engine that could’ about her. 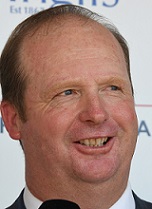 The four-year-old mare is a no frills racehorse, was a $25,000 buy and not a lot was expected of her other than to win a few races but trainer Gary Portelli is rapt to be giving her the chance to post a Listed win at Rosehill on Saturday.

Portelli admits he didn’t think he’d be entering the mare for a race like the Listed $150,000 Civic Stakes (1350m) which is her first attempt at genuine black type.

“Whenever I think I’ve found her level she proves me wrong,’’ he said.

“I thought the Civic Stakes might be biting off more than we can chew.

“She’s 100 per cent at her peak. If she can get black type, she has a fantastic pedigree, she is worth good money for her owners.’’

Nicci’s Gold, a noted wet track performer, posted her sixth win from 26 starts at Rosehill over 1500m two weeks ago as she came with her trademark late surge and took her earnings to almost $370,000.

Portelli said she’s been punching above her weight since she was a two-year-old when she surprised everyone by wining a 900m maiden at Newcastle 11 days after finishing unplaced at Bathurst.

“She showed a little bit of ability, enough to win a midweeker,’’ Portelli said.

“But she stepped up to provincial grade, then midweek, then Saturday and now she’s won as many as she can win under the benchmarks with where her rating is so she’s having a crack at black type.’’

In a wide market, Nicci’s Gold was a $12 chance with TAB on Wednesday.

Portelli has engaged Jason Collett, fresh from his Group 1 breakthrough last weekend, and is happy enough to forgo 1kg for him to ride her considering she loves the wet and he’s won three races on her back.

“We’ve freshened her up, her work on Tuesday was very sharp even though we tried to restrain her,’’ he said.

“She’s one of the better trackworkers at Warwick Farm and when we try to hold her up it annoys the hell out of her. But she has freshened up nicely.

“She’s drawn well, obviously carrying 1kg more but having Jason on with a Group 1 win last week his confidence will be high and he’s on a horse that he knows well.’’

Nicci’s Gold is accompanied by stablemate Testashadow in the Civic Stakes and Portelli says he’s not expecting the seven-year-old ($17) to win but is expecting a fruitful campaign stretching into the early spring.

The $1.4m earner has a modest first-up record, having not won first-up for two years, but he’s adept in rain affected ground.

“He’ll run well, he won’t be able to help himself. He’ll probably get tired with 100m to go though,’’ Portelli said.

“He’ll have a good campaign, there’ll be no doubt he will be running placings in some good races later on.’’

Gary Portelli’s comments on his other Rosehill runners:

Above And Beyond (Race 3, $12): “We’re hoping stepping him up to 1400m is the key. He was disappointing last start, I thought he would do better than what he did. This is a perfect race on paper for him. He’s a bit of a thinker, a quirky horse around the stables, but if he turns up and has a go there’s no doubt he’s good enough.’’

Improvement (Race 8, $21): “She’s drawn out but by that time of the day they’ll probably be out there. She’s come back from a tendon injury at her last start. She’s 100 per cent right now, she trialled enormous at Rosehill. I thought instead of another trial we’ll kick her off here and she’s into her preparation.’’