New Group I Winner for Pierro

New Group I Winner for Pierro

Earlier this year exciting Pierro gelding Regal Power showed his quality and stamina when winning the Group II WATC West Australian Derby (2400m) and he upped the ante at Ascot on Saturday when he beat a hot field to win the $1 million Group I WATC Railway Stakes (1600m). 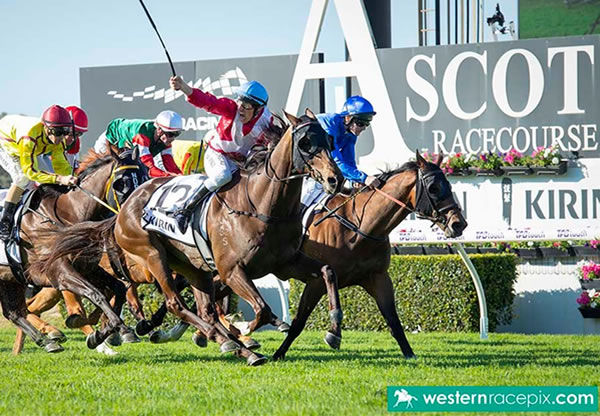 Having just his second run back from a spell, the Grant and Alana Williams trained four year-old settled back in the field for William Pike after jumping from a wide gate and charged to the line out wide to score a half length win over the Godolphin representative Best of Days (IRE).

“I felt like the pressure was off a bit (with the) wide barrier. I just had to go out there and wing it and hope that it went my way and it did,” Pike said.

“I got back a long way, but I actually had a pretty good run, I don’t know if I would’ve wanted to swap my run for too many others.

“Inside the last furlong, that’s where his character kicked in. He could either say ‘nah, I went too wide and done too much, or nah I’m here to play’ and he never laid down.”

A homebred for Bob and Sandra Peters, Regal Power has the overall record of five wins and six placings from 15 starts with prizemoney in excess of $1million.

Broadway Belle has been a regular visitor to Coolmore and has a yearling colt by Vancouver that was passed in at Inglis Easter, a yearling filly by American Pharoah (USA) and has foaled this spring producing another cracking filly by Pierro.

Regal Power is the sixth Group I winner for Golden Slipper winning sire Pierro, who has been super popular this spring at a fee of $88,000.