IT’S ALL SYSTEMS GO FOR JANUARY. SHE’S IN TRAINING AND READY TO GO.

This striking chestnut speed machine by Choisir will go to Luke Hilton at Gosford.

Luke and bloodstock expert Hinnerk Hueppe from Hannover Lodge inspected hundreds and hundreds of horses at the Magic Millions and sent Heart Thoroughbreds a simple text: “Go see 961.” So I went and saw lot 961 and was at first left stunned by her magnificent Chestnut appearance – then her walk and attitude.

Choisir needs no introduction as a super sire who’s done the business year after year. Our girl is a very typical Choisir. He won the VRC Lightning himself, as well as the Linlithgow beating Falvelon and he won twice at Royal Ascot. He has thrown stakes winner after stakes winner. He goes back along the magnificent Danehill line.

Falqueen has been a ripper in the barn. By Falbrav, she was a winner herself and has now had five horses to the races for five winners. A 100% record. They include Nikof (by Nicconi), which won a TAB Highway, and our filly’s full sister For Me Dad, which won five times and was desperately unlucky several other times, including when she was third in the Wellington Boot, narrowly missing a start in the Golden Slipper.

Her page is here: 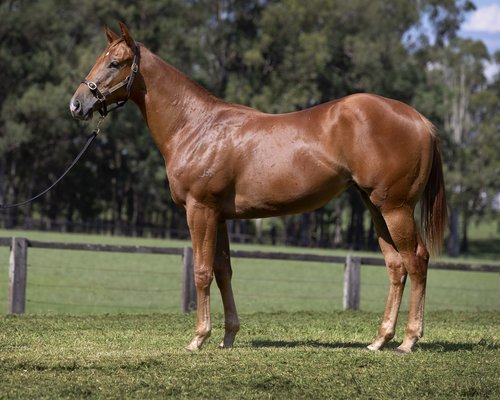 This filly is being sold through Racing Australia’s Thoroughbred Trainers Service Centre (ttsc.com.au) under Australian Financial Services Licence No. 288 213. For a copy of the PDS contact Neil Breen via our contact page or email him at nbreen@heartthoroughbreds.com

*Prices include GST and are inclusive of all expenses including insurance, breaking in, training, spelling, major race nominations and Magic Millions Race Series fees, up to August 1, 2019.

Register your interest with Neil Breen at nbreen@heartthoroughbreds.com or on 0423 024 198

Hurry Only A Few Shares Left!!!