Four heats for juveniles on Monday morning at Rosehill delivered some interesting winners including two sired by Spirit of Boom, who posted his tenth stakes-winner last Saturday in Sugar Boom. 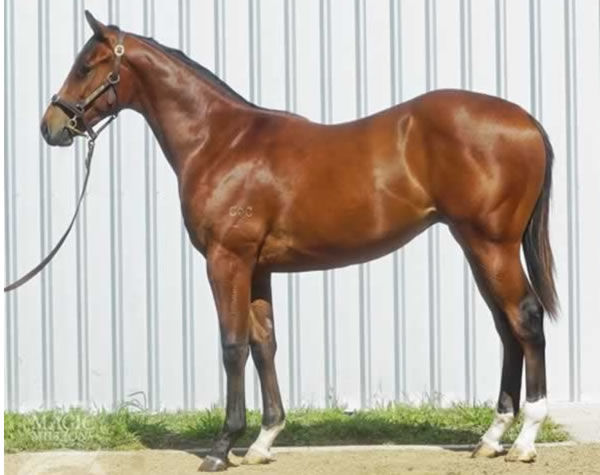 Strike as a yearling

One of three two year-old winners already for this season by Spirit of Boom, the Peter and Paul Snowden trained colt Strike won his debut at Eagle Farm in early October and showed his readiness for a return to raceday with this good effort.

He began well for Tommy Berry from a wide gate and surged forward to stalk the lead before cruising to the line under a hold to win the 900 metre heat by the best part of a length.

Eureka Stud will offer a half-brother by Defcon to Boomsara and Strike as Lot 625.

Gerald Ryan produced the second heat winner by Spirit of Boom when promising filly Spirituality showed good natural talent at her first public outing. She jumped well, but settled in fourth place and when shown clear running down the straight lengthened stride in good style to win by three-quarters of a length.

Spirituality was an $80,000 Inglis Premier purchase for her trainer from the Eureka Stud draft at Inglis Premier and is a half-sister to four winners including the dam of stakes-winner Tiatrolani from the family of Group I winners Excites, Duporth and Delago Deluxe.

Coolmore’s exciting first season sire Pride of Dubai featured with the Gai Waterhouse and Adrian Bott trained filly Dubai Star, who dominated her heat to win by three and a half lengths eased down.

Second in the Listed MRC Merson Cooper Stakes at her only outing, Dubai Star looks a ready made winner.

A $320,000 Inglis Easter purchase for her trainers from the Segenhoe stud draft, Dubai Star runs for an ownership group that includes her breeder Sheikh Mohammed Bin Khalifa Al Maktoum in whose colours she runs.

Segenhoe Stud will offer a full sister to Dubai Star at Magic Millions 2020 as Lot 423.

The fastest heat winner was Fastnet Rock colt Return With Honour, who lead all the way and scored a narrow victory in a very competitive trial.

A $520,000 Magic Millions purchase from the Rosemont Stud draft for Blandford Bloodstock, Return With Honour is a three-quarter brother to dual Group I winning sprinter Sacred Star from Irish Nova, a sister to the dam of Group I winners Embellish and Diademe.

Diademe is the dam of current season two year-old stakes-winner Unition, who is also by Return With Honour’s sire Fastnet Rock.

Click here for all the trial results at Racing NSW with video.