It looked a demanding track at Flemington last Saturday with long margins from first to last in nearly every race including the Victoria Derby with a spread of almost 50 lengths from top to tail.

Which has shattered the confidence a touch for Tuesday’s $8 million Lexus Melbourne Cup. After believing the winner would come out of the Caulfield Cup, with the likelihood of a heavy track at Flemington, now it looks less certain.

Nothing ventured nothing gained – here are the four most likely.

I’m going to stick with the Chris Waller-trained Finche (GB) who has not put a hoof wrong in four starts since finishing fourth in the race last year.

At his first start in 42 weeks, the son of Frankel finished a meritorious fifth in the Group II Chelmsford Stakes then opened his winning account in his adopted homeland in the Group III Kingston Town Stakes at Randwick. 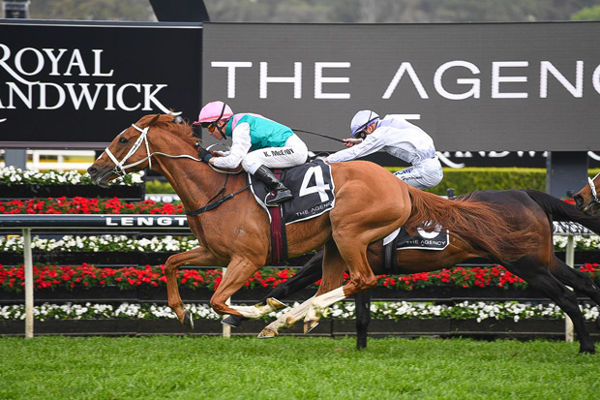 Taken down south he opened his Melbourne campaign with a fighting second to Kings Will Dream (IRE) in the Group 1 Turnbull Stakes before prepping for the Melbourne Cup with a luckless fourth in the Caulfield Cup.

With the 3-time Melbourne Cup winning jockey Kerrin McEvoy in the saddle, prepared by a trainer who had knocked up winning Group 1 races of late and drawn to get a cosy run from barrier four, it’s hard to see Finche (GB) not figuring in the finish.

Purchased privately in a deal brokered by Avenue Bloodstock, the French Group II and Group III winner made two starts in Australia last spring, finishing third in the Group III Geelong Cup under a big weight before a fine fourth in the Group 1 Melbourne Cup.

Carrying the colours of his breeder, Prince Khalid Abdullah, who now shares ownership with some of Chris Waller’s leading clients Neil Werrett, Peter Tighe and Frank and Christine Cook, Finche (GB) is a half-brother to five winners including the 4-time US Grade 1 winner and multiple European Group 1-placed Proviso (Dansili) and Byword (Peintre Celebre) the Champion Older Male Miler in France in 2010 whose 7 wins included the Group 1 Royal Ascot Prince of Wales’s Stakes.

The Caulfield Cup winner Mer De Glace (JPN) may be just too good for them again and extend his winning sequence to seven but the ground may be a worry.

There must be some query on pedigree in running out a strong two miles although his sire Rulership raced almost exclusively over a mile and half against the best in Japan finishing in the first three in 16 of his 20 starts. 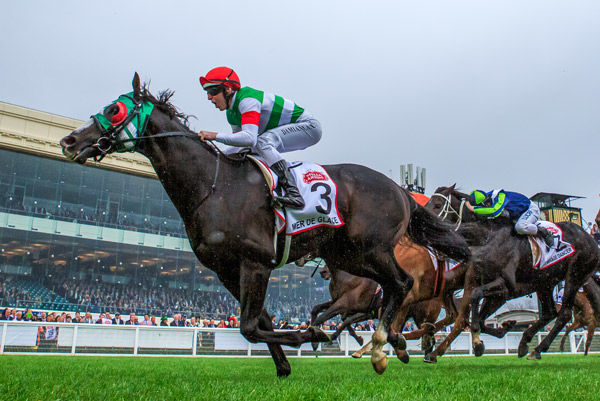 His 8 wins were highlighted by the Group 1 Queen Elizabeth II Cup at Sha Tin as a 5yo and was second in the Group 1 Takarazuka Kinen to Orfevre (JPN), third in Group 1 Arima Kinen won by Gold Ship (JPN), the Group 1 Japan Cup won by Gentildonna (JPN), and the Group 1 Tenno Sho won by Eishin Flash (JPN).

From his first crop, Rulership has sired that tough as teak front-runner Kiseki the winner of the Japanese St Leger over 3000 metres

A three-quarter brother to Satsuki Sho (2000 Guineas) and Tokyo Yushun (Derby) winner Duramente, Rulership is a son of the wonderfully versatile King Kamehameha who is the sire of the latest stallion sensation Lord Kanaloa.

If you were hoping for some encouragement from the female line of Mer De Glace (JPN) you may be in for a disappointment. His dam Glacier Blue (Sunday Silence) won three races up to 1400 metres and his granddam Blue Lustre is an unraced daughter of Nureyev who produced six winners the best of which was the stakes-winning Machiavellian colt Grass Bomber who won up to 2000 metres.

One of her daughters Blue Symphony is the dam of the Group III Prestige Stakes winner Fantasia (Sadler’s Wells) who placed at the highest level in the Just a Game Stakes Ascot Fillies’ Mile and Poule d’Essai des Pouliches.

The late great Sadler’s Wells has left his stamp on this year’s Melbourne Cup with 16 of the 24 runners being by sons or grandsons, which include the Derby winner Camelot who has three runners including poor old Hunting Horn (IRE), a 5yo entire who is on nodding terms with the likes of Enable, Magical, Bricks and Mortar, Crystal Ocean, Sea of Class, Waldgeist, Anthony Van Dyck and Catholic Boy.

Sadly, the son of Camelot has often been used as cannon fodder for those champions so it’s little wonder that he looked back in joy to see that it was Mr Quickie and Downdraft (IRE) chasing him home in the Group II Moonee Valley Gold Cup. 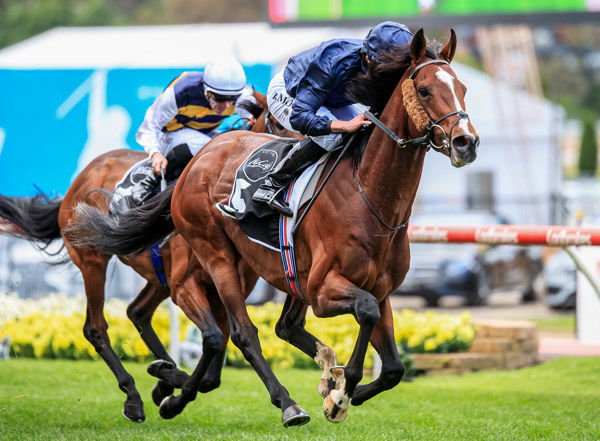 That was just his third win and his first since the Group III Hampton Court Stakes (2004m) at Ascot back in June last year.

His only other win came in a 2011 metre maiden on a bottomless track at Naas when he beat Latrobe (IRE), so a heavy track should be no problem.

A half-brother to the Group II Beresford Stakes winner and Group 1 National Stakes third David Livingston (Galileo), Hunting Horn is out of the unraced Indian Ridge mare Mora Bai is a half-sister to the great racehorse and stallion High Chaparral (IRE) who, among others, sired Joseph O’Brien’s Melbourne Cup winner Rekindling (IRE).

Coolmore recently retired Galileo’s magnificent daughter Magical whose career came to an end after winning the Qipco Champion Stakes at Ascot and the pedigree could be rewarded with another big update when Godolphin’s Cross Counter (GB) defends his Melbourne Cup crown on Tuesday. 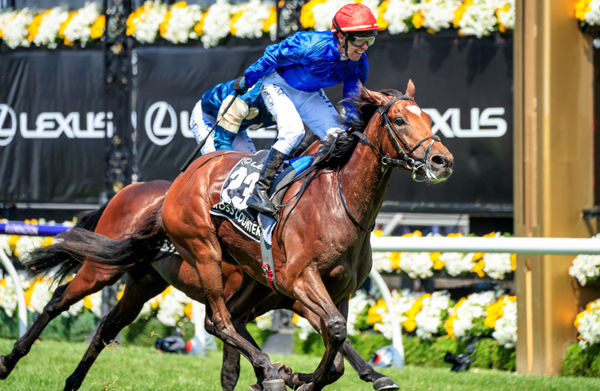 That pair are also half-sisters to that underrated stallion Verglas who won the Coventry Stakes and was runner-up in the Irish 2000 Guineas.

The winner of the King Stand Stakes and runner-up to Mozart in the July Cup, Cassandra Go (Indian Ridge) far exceeded her half-sister on the track and is setting up a dynasty of her own at stud.

It began at the Goffs Million in 2005 when John Magnier outlaid €400,000 for the Rock Of Gibraltar filly Theann at the same sale the following year Demi O’Byrne needed to go to €450,000 for Cassandra Go’s Pivotal filly Halfway To Heaven.

Eleven years later MV Magnier had the final say at 1,600,000 gns for the Invincible Spirit filly Fantasy who has been stakes-placed twice in a very busy season at two in 2018.

Halfway To Heaven has fared even better. After a stellar career on the track that brought three wins at the highest level, the Irish One Thousand Guineas, Sun Chariot Stakes and Nassau Stakes, Halfway To Heaven has just about cemented her blue hen status with Magical, triple Group 1 winner Rhododendron and the Group III winner Flying The Flag. All three had a great start to life being by the champion Galileo.

Back to Persian Secret who is a daughter of Persian Heights.

A stakes-winner in France, Persian Secret has produced 11 winners led by the stakes-winner Sheba (Alzao) who was third in the G1 Mother Goose Stakes, and the Gr III  Prix de Meautry Royal Barriere winner Do The Honours (Highest Honor) who won 5 of her 10 starts.

To a mating with Kingmambo, Do The Honours produced the stakes-placed Waitress who is the dam of Cross Counter.

Cross Counter has not gone backwards since his ground-breaking win for Godolphin in last year’s Melbourne Cup.

In March he defeated Ispolini (Dubawi) in the Group II Dubai World Cup and came off a three-month break to finish a close-up fourth in the Group 1 Ascot Gold Cup won by Stradivarius.

Following a third to the same horse in the Group 1 Goodwood Cup, Cross Counter rounded out his European season with a fourth in the Group 1 Irish St Leger at the Curragh.