The $HK10million Hong Kong Classic Mile at Sha Tin on Monday was won in commanding style by exciting prospect Golden Sixty, an Aussie bred Medaglia D’Oro (USA) gelding, whose half-brother Quiet Riot was also a winner at Warwick Farm earlier in the day. 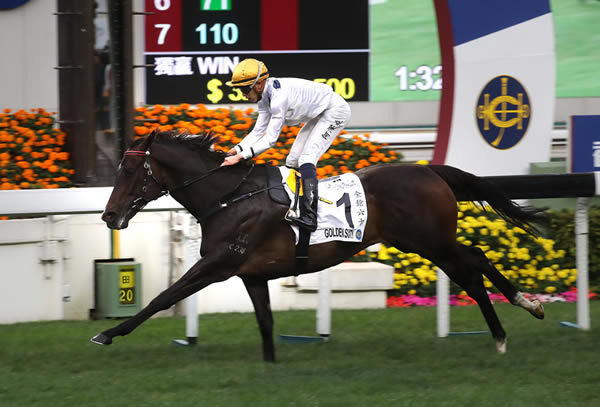 Golden Sixty burst into clear ground at the head of Hong Kong’s four-year-old pack with an impressive win in the 1600 metre feature, a result that bolstered trainer Francis Lui’s hand for the BMW Hong Kong Derby (2000m).

Lui saddled two of Hong Kong’s brightest young stars in the event and both came good: while Golden Sixty dazzled, More Than This showed Derby sparkle in second to ease the handler’s nerves.

“It’s a kind of relief – I was a little nervous and the closer we got to the race, the more nervous I felt,” Lui admitted after securing his first victory in the storied contest, the first leg in Hong Kong’s three-race Four-Year-Old Classic Series.

“Golden Sixty has done what has been asked of him every time,” Lui continued. “Last race he went 1400 metres, this race was a mile and next time will be 1800 metres in the Hong Kong Classic Cup, so we will take it step by step. If he runs well in the Classic Cup we will go to the Derby.”

The winner took his career tally to eight wins from nine starts and made it a perfect five this season, all under Ho who was also bagging a first Classic Mile success.

“He was a bit keen today and he took some time to settle but he still showed a good turn-of-foot,” the rider said. “He lay in a little bit, which made things a little bit harder, but he still won very easily.

“It’s just a matter of time for him, to pick him up, and I just have to be patient on him and then he will give me everything he has.”

Golden Sixty was a $300,000 NZB Ready to Run Sale purchase for his trainer from the Riversley Park draft and was a super successful pinhook having been sourced from the Element Hill draft at the Magic Millions Yearling Sale for $120,000. 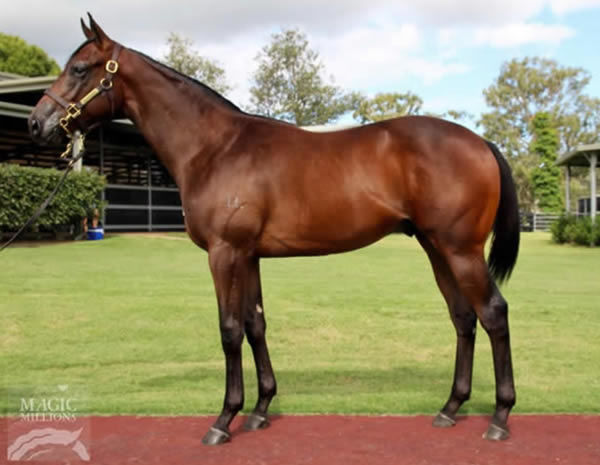 Quiet Riot as a yearling

A half-brother to stakes-placed Igitur, Golden Sixty is the best of five winners from US bred Irish Group III winner Gaudeamus (USA), a Distorted Humor mare from the family of Group I stars Bosra Sham and Hector Protector.

She had two winners on Monday with her Fastnet Rock three year-old Quiet Riot making a winning debut over 1100m at Warwick Farm for the Bjorn Baker stable.

Quiet Riot was a $200,000 Magic Millions purchase for his trainer from the Element Hill draft.

Gaudeamus has no yearling for the sales this year, but does have a filly foal by Capitalist and was covered last year by Trapeze Artist.