Yes, you read that right. The mighty mare will be given every chance to line up in the Arc, Europe’s most prestigious race, later this year but the more immediate focus is to finally win an elusive $4 million Longines Queen Elizabeth Stakes (2000m) at Royal Randwick on April 9.

Brae Sokolski, a part-owner of Verry Ellegant, is already excited about the likely clash between his super mare and the outstanding Zaaki in Sydney’s richest weight-for-age race during The Championships.

“This is a ‘match’ race everyone wants to see – everyone other than JMac (jockey James McDonald, the regular rider of both horses).

“I would have loved for Addeybb to return this autumn as it is fascinating for racing when they have these rivalries but there will still be some formidable opposition.

“To have Verry Elleegant and Zaaki heading for the Queen Elizabeth Stakes is so exciting. They have never raced each other so it will be a fascinating duel.’’

Verry Elleegant, who has never won or even been placed in a barrier trial throughout her career, lined up in the first heat where McDonald kept the mare under a tight hold.

Riodini was ridden with intent to win the trial from I Am Superman and Mirra Vision followed in order by the proven topliners Think It Over, Hungry Heart, Montefilia, Kolding, Icebath, Duais and Verry Elleegant.

Sokolski, who spoke to The Daily Telegraph while on holiday in Fiji, wasn’t worried that Verry Elleegant made a low-key start to her 2022 campaign. 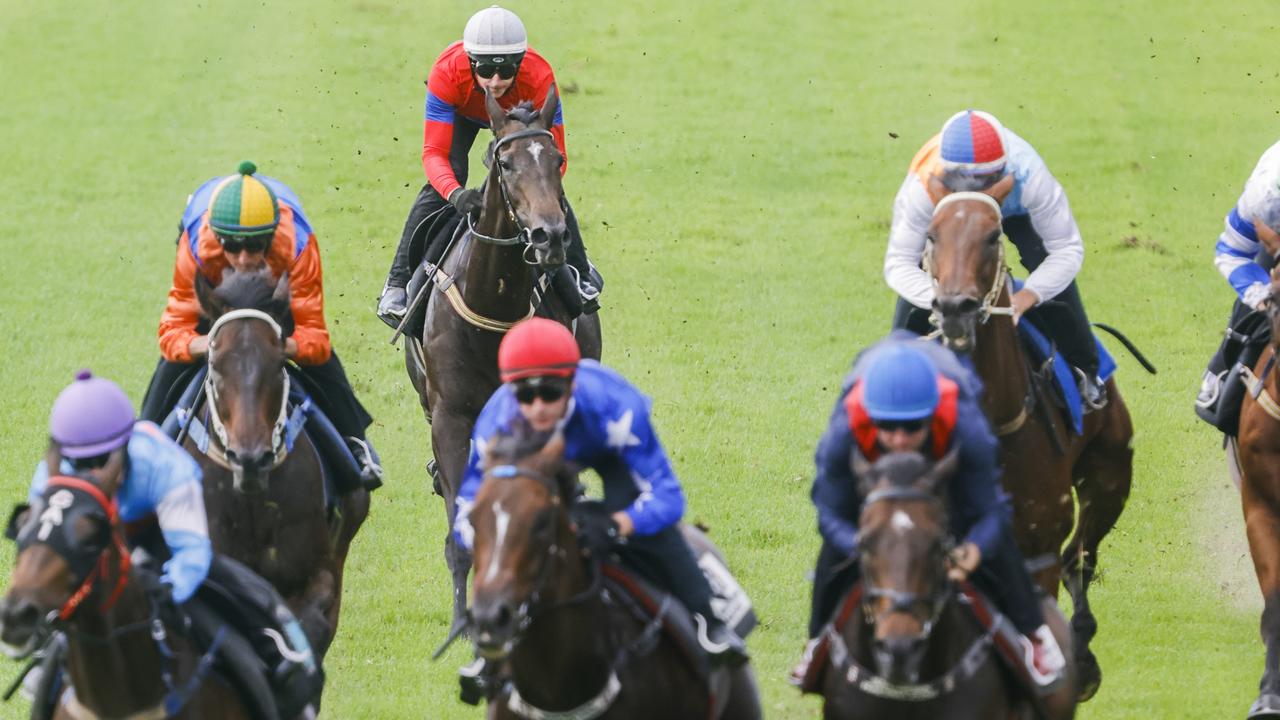 Verry Elleegant (red, white cap) was kept under a good hold in her trial at Rosehill on Monday. Picture: Getty Images

“It’s impossible to read too much into the trial,’’ Sokolski said.

“All I know is how happy Chris (Waller) is with the mare, she is really well and physically strong and sound. The trial has blown the cobwebs away for the Apollo Stakes next week.’’

“The Arc is absolutely on her agenda, we feel it is the ultimate challenge,’’ Sokolski said.

“I’ve told Chris not to pencil it (Arc race date) in on the calendar but to use a texta marker!

“We are not perturbed at all taking on Europe’s best on home soil. The Longines World Rankings give us the confidence we have a world class stayer and we fee she is going to acquit herself incredibly well.

“I’m already looking at some program options with Chris for Europe. Our focus is the Sydney autumn carnival then we want to give her a spell before deciding on her campaign structure for the Arc.’’

No Australian-trained horse has won an Arc with John Singleton’s Strawberry Road faring best finishing fifth to Sagace in 1984. New Zealand champ Balmerino ran second to Alleged in the 1978 Arc.